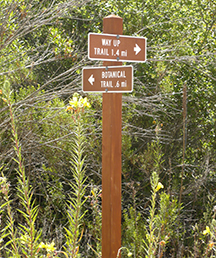 In my first seven months of living in San Diego, I’ve heard mostly about the hiking trails in Torrey Pines State Reserve. I put that on my mental list of things to do on a warm, sunny weekend. But my first walkabout in a natural setting (San Diego Botanic Garden notwithstanding) was at the smaller, lesser known Elfin Forest Recreational Reserve tucked away from the main roads in Escondido.

Oddly enough, it was a manmade structure there that initially gained my attention. I learned that the Elfin Forest Interpretive Center was built by artist James Hubbell and his architect son, Drew. But it was the prospect of a guided nature walk that got me out on a Sunday morning. And as one who appreciates such things, I was tickled to find that someone with a fitting name would lead the walk: Donna Walker.

Donna began her rundown of the reserve’s flora and fauna with a description of the 4.5-inch California gnatcatcher that likes to live in coastal sage scrub. I feel a little sorry for this petite fellow, as I think “gnatcatcher” sounds rather calumnious, especially compared to the melodious moniker given another mini-flyer: “hummingbird.”

More diminutive yet is the tarantula hawk, which is not, as one might assume, a hawk the size of a tarantula or even a tarantula the size of a hawk (a scary thought, indeed). No, this Elfin Forest dweller is a wasp, which begs the question, “Why is someone out to confuse us?”

Donna explained that this arthropod, which — at 2 inches — is not diminutive at all when compared to arthropods in general, but is smaller than tarantulas, which it hunts. I won’t go into the sordid details of what happens when the tarantula hawk captures the hairy spider. You can look it up if you want, but I’d suggest not doing so if you are easily grossed out or are eating.

As we began walking, Donna pointed out a wood rat’s house. It is, apparently, a real house in the sense that it has “rooms” (as many, I gathered, as my apartment), with each dedicated to an activity like eating and sleeping and one, Donna said, “to keep shiny things.” Hmmm, I only have a shelf in my closet for such items, and a wood rat has an entire room. One of us is clearly too materialistic — and it isn’t me.

With raccoons and mule deer out of sight, Donna had to rely on the reliably stationary plants for the “show-and-tell” portion of the walk. She pointed out the California sunflower, buckwheat, laurel sumac and the coastal sage so beloved by the gnatcatchers. She said we could safely taste the tiny fruit of the lemonade berry tree, but she did not same for the hemlock. She suggested we touch the sticky monkey flower (beloved by the harmoniously named hummingbird), but not the poison oak. She laughed a little when she called our attention to the Hooker’s primrose — yet another example of an unfortunate naming convention. This flowering plant’s sobriquet has no relationship to a frowned-upon profession, but rather someone named Hooker — in fact, a highly regarded British botanist who was knighted and served as director of the Royal Botanical Gardens at Kew. I wonder why the flower was not named the more respectful-sounding “Sir Joseph’s primrose.”

Donna informed us that the berries of the sugar bush are not sweet, as the name suggests, but are sour. And I learned that Hollywood is named after the toyon, which is known as California holly. Perhaps I shall henceforth call the city Toyonwood just to be as pretentious as some of the folks who live there.

With names in mind, I cannot in good conscience neglect an accounting of how the Elfin Forest Recreational Reserve itself came to be known as such. Even I didn’t need Donna’s expertise to know that there are no elves in Escondido, Everyone knows elves are only in Middle-earth and Keebler factories. Well, according to Donna, the name comes from a 1911 publication titled Chaparral: Studies in the Dwarf Forests, or Elfin-wood, of Southern California, written by Fred Gordon Plummer.

If you like knowing the names of things and/or just like to wonder about things like I do, you can join Donna on a guided walk at the Elfin Forest reserve on the second, third and fourth Sundays of the month.