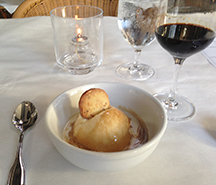 After a week of my car radio seemingly programmed to repeat “We’re up all night to get lucky” and “We put our hands up like the ceiling can’t hold us,” I found it refreshing to hear what I call “the good stuff”: Jackson Browne; Crosby, Stills & Nash; James Taylor. Please don’t egg my car, fans of Daft Punk and Macklemore; I realize it’s just a matter of taste (yes, you can call it a matter of “age” as long as you don’t egg my car).

But I digress. That is, my intention is not to write about music (even though I’m bringing to mind a Four Seasons hit with my header for this blog). After all, if I intended to focus on music, I wouldn’t use the above photo of food, which is what this really, ultimately, is going to be about.

After a scouting trip for the magazine, and based on an email I had received during the week, I made my way to Wine Vault & Bistro between Missions Hills (where I had been) and Little Italy (where I was going). That’s where I heard “the good stuff” playing as background music. It was a Thursday evening, when Wine Vault & Bistro offers a prix-fixe, three-course dinner for $20 with a wine pairing for $15.

For my first course, I chose a rosemary roasted fig tart with wild arugula, carmelized shallots, whipped goat cheese and balsamic vinegar (see photo below). I love, love, love figs — and this dish did not change that one iota. It was as yummy as it sounds to a fig lover. The paired wine was a zinfandel from Paso Robles that I also found yummy.

For my second course, I selected local halibut with braised fennel, thumb potato and an heirloom tomato vinaigrette (see photo below). The fish was beautifully presented and perfectly cooked. The paired wine was a pinot noir from Sonoma County. The winemaker’s notes (presented on a sheet that also serves as an order form) said it had an “earthy/fruity nose of forest floor and dried rose petals with a background aroma of muted cranberry.” Even given the power of persuasion, I couldn’t nod and say, “Ah, of course, there’s the forest floor … and, if I’m not mistaken, that’s dried Rosa rubiginosa … and wait … ahh, indeed, the cranberry is so muted I almost missed it.” Were I to write the winemaker’s notes, I would just cut to the chase: “Pairs nicely with halibut, braised fennel, thumb potato and heirloom tomato vinaigrette.”

Because I was dining solo, I had taken in with me a magazine and began reading an article about the history of women blacksmiths. But I ended up losing my place in what was a fascinating story and giving all my focus to the tastes that deserved my full attention.

Wine Vault & Bistro also hosts winemaker dinners, which I plan to try. Sometimes you don’t have to stay up all night to get lucky. 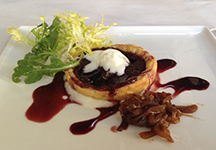 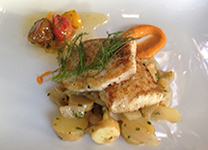