Liberty and the Pursuit of Happiness 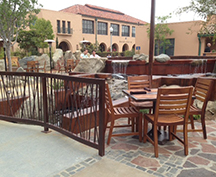 The Lady from Another Planet made me smile. “I could so wear that,” I said, reminded of the Diva in The Fifth Element. (I think most women — and some men — occasionally like to imagine themselves as divas.)

Lady from Another Planet is the title of a wearable work of art — a jacket, tail and leggings made from 75 white socks — by Osbaldo Ahumada of San Diego. It’s part of an exhibition titled Second Time Around: Fashion Recycled, opening today and running through Aug. 25 at Visions Art Museum in the NTC at Liberty Station complex.

Osbaldo writes, “She is looking for the right way to wear red.”

She need only look to Stockings de Seville, which includes a pair of red stockings knotted into a “rose” hair adornment that sets off a tango gown made from 55 pairs of black nylon stockings and edged with red thread. Shaun Muscolo of Simi Valley made that artistic garment.

The complex hosts Friday Night Liberty — open artist studios, gallery receptions and performances — on the first Friday of every month (i.e., tonight). I saw another exhibition in preparation at the Women’s Museum of California: Wonder Women: On Paper and Off. The summer show features Wonder Woman (of course), but also comic strips created by women. Arts and Programs Director Kathleen Adam pointed out a Thimble Theater comic by Fay King depicting herself as Olive Oyl and explained that Olive preceded Popeye! I was particularly pleased with this bit of news, because I’ve channeled Olive Oyl a few times on Halloween (and I have the costume to prove it). I also was delighted to see Brenda Starr on the walls and learn that a female artist created the star reporter (Dalia Messick used the pseudonym “Dale” to break into the comic business).

Alan showed me a few other spots in the Barracks, including the San Diego Watercolor Society’s gallery, a children’s bookstore, a tea shop and a pottery-making studio. Then I saw Stone Brewing Co.’s amazing new digs. I peeked in at the shiny silver fermenters in the brewhouse and cruised through the huge restaurant that features a clever use of I-beams, stone-slab walls that would beckon a rock climber were they taller and a fountain incorporated into a long table. There’s a separate dining room with beer-bottle chandeliers. Outside areas include two bocce ball courts, a turf area for events and an immense patio with fountains and a rebar bridge railing (shown in the above photo). Stone Brewing was abuzz pre-5 p.m. on a Thursday. I can only imagine how lively it gets post-5 p.m.

To end the tour, Alan showed me the McMillin Event Center, where members of the Cystic Fibrosis Foundation were in the final throes of preparing for the evening’s Great Chef Throwdown fundraiser. The main hall and outdoor court looked stunning.

I had parked in a lot right across from Solare Ristorante. My car looked perfectly happy to relax there in lieu of negotiating rush-hour traffic, so I stepped into Solare and enjoyed pizza and wine at the bar. There I met Patrick Stewart, executive director of the literacy nonprofit organization Words Alive and chair of the board of directors for San Diego Writers, Ink, which is moving its offices from downtown to the Barracks this month. SDWI is holding its sixth annual Blazing Laptops Write-a-thon fundraiser at Liberty Station on Sunday from 9 a.m. to 6 p.m. I’ll be on the grounds myself that afternoon for the 30th annual Wine & Roses charity wine tasting that runs 3 to 6:30 p.m.

Before leaving Liberty Station, I ducked into Trader Joe’s for a few of my favorite TJ staples and went home happy.

I plan to continue exploring all that this former Navy training base has to offer. Alan explained to me how the city-owned property came to be transformed into a hub for the arts (including dance studios), nonprofits, commercial operations and events. Sixteen of 26 buildings have been renovated for $63 million as part of a $100 million project. Completed in October, the Barracks are already 70 percent occupied.

I’ll be really happy when the 1,800-seat auditorium is restored.