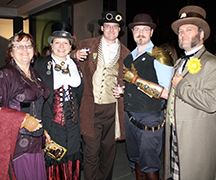 Courtesy of Oceanside Museum of Art

A couple of Christmases ago, a friend gave me a pirate’s cutlass that he made. I’d shown no inclinations to wear a patch over one eye and a parrot on one shoulder, but I had taken to sabering open bottles of Champagne — thus the gift. Last Friday evening, while watching a woman dance with a sword balanced on her head gave me another idea — albeit a fleeting one, as my cutlass lacks the deep curve of the blade that helped her balance a sword while moving up and down and turning around.

As far as I know, it’s rare to see this sort of skill exhibited in San Diego. And, as far as I know, it also is rare to see a crowd of people wearing clock/watch mechanisms and goggles, aviator caps and top hats, leather and metal armatures, petticoats and corsets, and combinations of Victorian and Western garb.

Furthermore, I had yet in my local outings to encounter a band of young musicians playing accordion, bass, violin, banjo and bongos to create a style of music that is difficult to describe, let alone pinpoint (though I thought I detected a bit of Slavic/gypsy influence). That changed with the Mad Marionettes.

On the patio, a whole tuna was laid out on a table (being carved to serve 1,200 fish tacos), while steam poured out of a time machine that was being closely guarded (apparently the museum did not want to have to answer for the disappearance of its guests).

If it sounds like I’ve lost touch with reality, well, that’s precisely what Dr. Steampunk’s Art Extravaganza was all about. The annual event — produced and hosted by the Oceanside Museum of Art — is quite popular, I was told. And I can see why.

Steampunk, for those who haven’t followed this subculture, is a wonderful combination of retro and futuristic elements — something of a puzzlement on how those who lived in Wild West or Victorian times might have imagined the future.

As happens when I get intrigued by something new to me, I have spent a bit of time reading articles about steampunk posted online. Following one link to another, I came across an interview with a founding member of Anthropunk (“a movement that examines how people promote, manage, resist and endure change; hack their lives [and those of others]; and create the context of the individuation of their experiences”).

Sally Applin, who is working on a doctorate at the Centre for Social Anthropology and Computing in the United Kingdom, talks about PolySocial Reality as a concept that describes the behavior that results from continual, multiplexed time and space-shifted communications (basically, our continuous connection to those who “aren’t there,” so our consciousness is drawn away from our current physical space).

I’m happy to report that I saw a lack of PoSR behavior at Dr. Steampunk’s Art Extravaganza (this alone is an oddity in a time when people are on mobile devices everywhere you go). Everyone at the museum on Friday seemed to be quite concentrated on what was going on right there — which makes me wonder if the only way to get our collective attention is to make our “reality” filled with “fantasy.”

Or, as Mya sings, “Try to make it real, compared to what.”