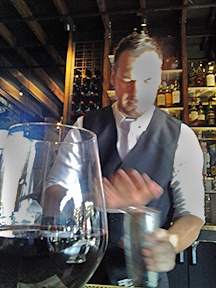 I conducted a test last weekend. Well, that’s not entirely true. That is, I didn’t set out to conduct a test, so one could quibble with that characterization and I’d have to concede the point that my proclamation stretches the definition of “test.”

Nevertheless, my weekend outings yielded insights — similar to the way insights arrive to those who set out to assess one thing or another, in the laboratory or in the field.

My own situation could be considered both lab and field. Yes, I am referring to a bar.

It started just west of Balboa Park, where a friend and I found a friendly and helpful staff at Cucina Urbana. Now, to be upfront (which I typically am), I know a thing or two about wine. I’ve read exhaustively about it, attended educational as well as social wine-related events and festivals, visited and toured wineries, talked with and interviewed many winemakers, and tasted a wide range of wines in the bottle and barrel.

However, there are more bottles of my favored beverage than I could possibly get to know in a lifetime; and the knowledge I possess on the topic admittedly leans heavily toward the domestic front (especially California wines, because that’s where I live and what is most available to me).

Perusing the shelves in Cucina Urbana’s corner retail wine shop, my friend and I saw wines we recognized, but even more that we didn’t. So when we sat down at the bar, we asked the bartender, Connor, for his recommendation(s). He fetched three bottles and set them in front of us; then he described each one. We settled on a bottle of Orin Swift’s “I” (for Italy): a red blend of Negroamaro, Nero d’Avola, Barbera and “native varietals” from Puglia. We knew the name Orin Swift, and we knew Barbera wine. The rest was new to us. We enjoyed the wine with pizza; but what impressed us most was the attention we received from Connor.

On Saturday, we had to eat again and this time walked into another recommended restaurant: The Patio on Lamont Street in Pacific Beach. At the bar, we ordered glasses of wine we knew (Tempranillo for me, Cabernet Sauvignon for him), but neither quite satisfied our palate at the time. So we asked our bartender, Gary (shown in the photo above) for his recommendation. He listened to us and then suggested the Man Pinotage from South Africa. It was only $4 a glass at happy hour price — less expensive and better, we thought, than either of our own choices.

On Sunday, we attended the first anniversary celebration of Vintana in Escondido. Having been pleased with our experiences at Cucina Urbana and The Patio, we sought wine-shopping advice here as well. Brian pointed out a couple of options based on what we said we were looking for. One was a Mollydooker red blend. He explained that the Australian winery preserves its wines by infusing it with nitrogen (you unscrew the cap, pour a little into a glass and then shake the bottle to release the gas). I was familiar with Mollydooker, but not the “Mollydooker Shake.”

If I may count three wine stops in three consecutive days as a representative sampling, I am willing to say that evidence shows San Diego to be a great place for letting bartenders and sommeliers guide one to discoveries.

Of course, any scientist worth his or her salt understands the value in obtaining irrefutable evidence, so I’ll be continuing my “test” in the weeks, months and years ahead of me.