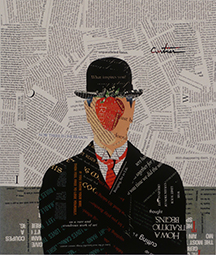 While waiting for the trolley, I read my newly acquired work of art and came to the happy conclusion that serendipity had once again graced me with its happy presence.

I had seen that a collage artist I know from the desert, Richard Curtner, was a featured artist at the Mission Federal ArtWalk in Little Italy. I met Richard in 2005 at the Indian Wells Arts Festival, where I was immediately intrigued with the way he uses printed words to enhance the theme of the images he creates by cutting shapes from the pages of magazines. I’ve not seen another artist do what Richard does.

This weekend, I arrived at his booth about 15 minutes into the artwalk; he had already sold three large pieces. I was eager to hear how his career was going, but he first asked me about my writing (he knew I wrote fiction in my “spare” time, which was one of the reasons I had purchased a print of his collage titled Storybook Ending: a still life of a manual typewriter). Coincidentally, I told him, I had just the previous evening gotten back to working on a novel after a long break.

As for Richard, he has been doing well on the festival circuit and with royalties on merchandise (i.e., bags and luggage tags) using his images.

Richard and I share an appreciation for Magritte, and I was drawn to his Strawberry Magritte (shown above), in part by the image and in part by phrases and questions on the composition: “Defies Convention Again,” “you could end up almost anywhere,” “unparalleled focus,” “the predictably unpredictable,” “Why limit your collection of original art?” and, on the Magritte-esque man’s bowler hat, “What Inspires You?”

It was not until I was back at the trolley station that I found architectural and design references in the smaller text that makes up the background, i.e., “one of the lasting critiques of the modern house …, “how a home should be experienced — felt and absorbed as much as lived in.” I found references to sound designer/architect Christopher Janney and Pritzker Architecture Prize winner Rem Koolhaas, as well as Diana Vreeland, Twyla Tharp and Rudolph Nureyev in articles about design. It was then that I seemed to recall Richard once telling me that he liked to use pages from Architectural Digest because of the quality of the paper stock. I will have to follow up with him and suggest he start using pages from San Diego Home/Garden Lifestyles, since our paper stock was recently upgraded and our content is ripe for the concepts he likes to convey.