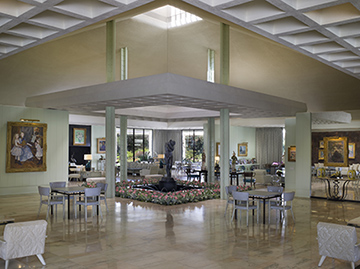 Photo by Ken Hayden. ©The Annenberg Foundation Trust at Sunnylands

You might think that walking into a 25,000-square-foot house (the living room alone is 6,400 square feet) and seeing a Rodin sculpture in a fountain under a shaft of light, surrounded by pink bromeliads, would be intimidating. But the feeling you get is, surprising as it may sound, one of intimacy.

On a recent trip to Palm Springs, I toured the estate of the late Walter and Leonore Annenberg. I’d seen it when The Annenberg Retreat at Sunnylands opened to the public last year. The invitation-only dedication was a preview event with a lot of people walking around. This time, as I toured the house in unpopulated quiet, the warmth of the people who lived and entertained here revealed its own presence.

As editor of San Diego Home/Garden Lifestyles, I am privileged to step into many impressive and even awe-inspiring residences. But no private home anywhere in the world can match Sunnylands’ history of hosting dignitaries (including seven presidents) and world-famous celebrities. In fact, it is the site of the only non-White House state dinner, held for the prime minister of Japan in 1990. Most importantly, Sunnylands provided an intimate place for discussions by heads of state and business leaders on national and international issues.

The Annenbergs have ensured their legacy continues through the trust they established to promote peace, education and problem solving by opening their estate for public tours and retreats among business and government leaders.

Sunnylands’ director of communications and public affairs, Mary Perry, told me that while guest suites are used for retreat participants, only the President of the United States and First Lady would be allowed to sleep in the Annenbergs’ personal bedroom. As I stood there, I envisioned Barack and Michelle Obama enjoying the view (the best amenity in the otherwise modest bedroom) before a day of meetings.

Sculptures by famous artists, reproductions of paintings (the originals — including works by Monet, van Gogh and Picasso — were gifted to the Metropolitan Museum of Art in New York), displays of Steuben glass and Flora Danica china and the A. Quincy Jones architecture itself are all impressive. But I especially enjoyed noting that the Annenbergs displayed photographs of their friends in groupings on shelves and walls.

On one wall in the “Room of Memories,” Walter Annenberg — who once served as ambassador to the United Kingdom — proudly hung the annual Christmas cards he received from the Queen Mother. I found it particularly interesting to note that the queen wore the same hat multiple times.

Outside the home are stocked ponds where the likes of Presidents Dwight Eisenhower and George Bush enjoyed fishing (No. 41 reportedly did so first thing in the morning while staying with the Annenbergs) and where birds migrating along the Pacific Flyway stop for a respite. Many dignitaries and celebrities have played Sunnylands’ nine-hole golf course, which, with different tees, plays as an 18-hole course.

Created to enrich the public experience, the visitor center and gardens are open free of charge. Programs include lectures, guided walks, live music and family activities. Tickets for tours of the residence are released online (sunnylands.org) at 9 a.m. on the first and 15th of the month and typically sell out in 10 minutes. It’s about a 2.5-hour drive from San Diego, so it’s easy enough to make a Sunnylands visit in a day. Just be sure to make time to watch the video about Walter and Leonore Annenberg in the visitor center. Then you’ll know what I mean when I say that great houses inspire me, but great homes inspire me even more.

Incidentally, The Offices of James Burnett in Solana Beach designed the gardens, which garnered the firm the 2012 Professional Honor Award from the American Society of Landscape Architects.