Just My Imagination Running Away With Me 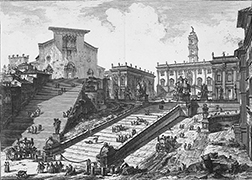 Technology never ceases to amaze me — both for its ability to allow us to experience things that are otherwise impossible and its ability to “fail” us.

My GPS is a case in point. It gets me from point A to point B; but last week when I entered into it a destination that was about 10 miles away, it told me my arrival time was going to be several hours later. (Usually it takes me longer to get somewhere than estimated by Garmin, which obviously doesn’t understand the concept of the long stoplights with which San Diego is replete.)

My GPS also doesn’t intuit when I type “SD” before a destination — even though it recognizes that I am in San Diego — that I intend to remain in California. I laugh every time it announces that I have arrived at “South Dakota [such and such].”

This week, I went to South Dakota … oops, San Diego Museum of Art to view the new Piranesi, Rome and the Arts of Design exhibition; and it really got me thinking about technology.

An Italian architect of the 18th century, Giambattista Piranesi, the exhibition points out, wanted to “reform contemporary architecture according to the methods and models of the ancient Romans.” His legacy, however, lies in the intricate etchings he produced, particularly of Roman ruins and imaginary prisons. When you consider the time it takes to create an etching with a sharp needle, the details in his work make your head spin. In one area of the exhibition, magnifying glasses allow you to study the millions of tiny lines comprising the image.

If looking at the drawings makes your head spin, then another part of the exhibition will make your head leave your body altogether. That’s the feeling I got anyway while watching a 3-D video that let’s one “step into” Piranesi’s imaginary prisons.

Piranesi made his etchings in the mid-1700s — a time predating 3-D imaging. So the juxtaposition of what he accomplished by hand and what today’s techies have accomplished with computers really tickles me — even more than the thought that I can drive to South Dakota in less than a half-hour.

Do not miss Piranesi, Rome and the Arts of Design. The exhibition runs through July 7.

Above image: Giambattista Piranesi’s View of the Romano Campidoglio with Staircase that Goes to the Church of Araceli. Fondazione Giorgio Cini, Venice. Courtesy San Diego Museum of Art.