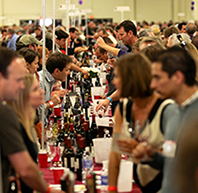 Last night, I learned that the amount of knowledge I credited myself with having about West Coast wines was a figment of my imagination. Wade Hansen, the founder and managing director of Cabrillo Advisors and founder of the San Diego International Bordeaux Society, invited winemakers to pour at the San Diego Wine Affair benefiting Rady Children’s Hospital Foundation and San Diego Social Ventures Partners. As I walked around the Estancia La Jolla room in which the event was held, I saw among about 30 wineries represented only three with which I was familiar. Unless we’re talking about a sales tax, I consider 10 percent a small amount.

The positive spin to that is that I had a 90 percent chance to discover something great (and I did) among names like Shane, Grassi, Rasa, Ken Brown, Peirson Meyer, Pali, R2 …. And an informal poll I took among other attendees (granted, a small sampling) revealed that they were similarly in discovery mode.

Discovery is one of the reasons people who really enjoy wine stay interested in it — and it’s one of the reasons wine festivals continue to attract crowds. Coming up March 9-10 is Family Winemakers of California’s fifth annual wine tasting at the Del Mar Fairgrounds (pictured above).

“We have always had a fine turnout in San Diego,” says President Paul Kronenberg, noting that last year’s event attracted more than 1,100 consumers and about 1,200 members of the trade.

This year, FWC lost its second-week-in-March date to another Pasadena Convention Center client, so it added a second day to the San Diego tasting. Consumer tasting runs from 3 to 6 p.m. on March 9; members of the wine-buying trade can taste wines from 1 to 6 p.m. on March 9 and from 1 to 5 p.m. March 10.

Another new aspect of this year’s event is a Reserve Area with a separate admission.

“This is an area to give a little added push to wineries that want to feature wines in a certain price range,” Kronenberg says. “We have given all the wineries the opportunity to be in the Reserve Area and 22 [of 162 wineries participating] have taken us up on that.” Each winery gets assigned a one-hour time period to pour their higher-end wines.

According to Kronenberg, about 98 percent of FWC members are small, family-owned wineries producing 5,000 to 10,000 cases a year.

“Some [San Diego tasting participants] will pour upwards of seven to 10 wines, and some will be pouring just one wine — and maybe that’s all they make,” he says.

I’ve looked at the list of participating wineries (familywinemakers.org) and see more new names. If learning algebra had only been as much fun.