A Slice of Life 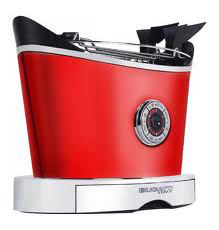 Amazingly, I’ve lived without a toaster now for a little more than a month. Since making an incremental move from Palm Springs to San Diego (Oh, is she ever going to stop milking that cow?), I’ve gone without a few accustomed amenities. The appliance I’ve most missed is a toaster. Yes, I could run out to any number of gourmet cooking shops, department stores or discount chains and pick up something to make a slice of bread the proper surface for butter. But while buying a toaster requires less research than buying a car, I nevertheless think it deserves a considered approach. After all, unless you have a gourmet kitchen with cabinets harboring outlets for hidden-but-handy appliances, you have to consider form as well as function.

Thank heaven (as well as Larry Page, Sergey Brin, and Jeff Bezos) for the ability to hunt down the perfect toaster (or, for that matter any other object you desire) from your living room (especially on a holiday when brick-and-mortars are closed). Here are some of the noteworthy options I discovered:

Bugatti (yes, the same company founded by the Italian family that offers us the Veyron and other high-performance cars) makes a chrome toaster (shown above) with a defroster (good, because I store bread/bagels in the freezer and sometimes forget to take one out for the next morning’s breakfast), a motorized lift and bun warmer that doubles as a serving tray. The Bugatti toaster would be an excellent choice for me as the editor of San Diego Home/Garden Lifestyles not only for its good looks, but also because Giovanni Bugatti was an architect and his son, Carlo, made furniture before Bugatti became a brand known for impeccably designed cars. Unfortunately, I only found the Bugatti toaster on Amazon’s U.K. site for 170 pounds ($277), which seems a bit steep for a toaster, even though it comes with an instructional DVD.

A much more reasonably priced option ($43 on Amazon’s U.S. site) is Back to Basics’ toaster, which, contrary to being merely basic (i.e., toasting bread), simultaneously poaches or hard boils eggs and warms bacon or sausage. But I’m a vegetarian, so I don’t need to warm bacon or sausage, and I prefer my eggs sunny-side up or as an omelet.

Ivo Vos, a London-based product designer, came up with a design that catapults your toast. I can see the value of this if you are 5 years old (or are the parent of a 5-year-old), but frankly, I don’t want to spend the time figuring out the correct force and angle to hit my plate, and I envision crumbs landing where I don’t want them (which is anywhere).

If one is a LEGO, Hello Kitty or Domo fan, there’s a toaster out there for them. But I’m looking for an appliance, and these all look like toys. The Domo toaster is milk chocolate brown with a saw-tooth mouth on the front and prints the Domo picture on your bread. But one Amazon reviewer points out that the picture “is a bit off centered unless you move the bread to one side of the toaster.” I guess if you’re a Domo fan it matters if the picture is centered.

Jamy’s Wi-Fi enabled, weather-forecasting toaster “burns” a picture image (i.e., clouds) and the high and low temperatures on your bread. Two problems: (1) I don’t like burnt toast (even if it’s just partially burned) and (2) it’s still a conceptual product.

There’s a toaster that looks like nothing more than two sheets of glass on a chrome base. The transparently prevents under- or overdone toast. But it’s apparently also still in the conceptual stage. I guess that’s why it’s called The Future.

I also found a “portable toaster” that’s more like a wand. But I’ve yet to find an occasion when I’m out and about and feel a sudden urge for toast. And even if I did, with my luck, I probably wouldn’t have any butter in my purse.

Sasha Tseng, a San Francisco product designer, may have come up with the best solution for the person who leaves the house early and wants to remind his/her spouse to pick up a carton of milk on the way home. It has a message board that gets toasted onto your bread. This would have been great for Mission Impossible: no more self-destructing tapes; Jim Phelps could have just eaten his instructions.

My online search for the perfect toaster had obviously led me astray (like that’s never happened before), and I couldn’t resist the urge to see what aspiring entrepreneurs might have in mind on Kickstarter. I found a “toaster-like” iPhone alarm clock and a couple of comic-inspired literary projects: The Strange Adventures of Toaster Guy and The Toaster with Two Brains. Now I’m off to a gourmet cooking store, department store or discount chain to find what I was after all along: a countertop appliance that makes toast — one of the pleasures of home.