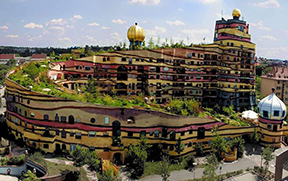 During my 5 to 6 a.m. routine in the fitness center (yes, I throw that in to impress), I caught on KUSI TV’s news this morning a house in Seattle where the owner, Patrick Kruger, had cut off the top 6 feet of a 14-foot Christmas tree and mounted it on his roof, surrounding it with propped-up shingles to create the illusion that the tree in his house (viewable from the front window) had broken through his ceiling.

It turns out that Kruger is an architect, which got me thinking more about architects and the way they think.

I favor architects who break the mold (if not the ceiling), seemingly defy gravity and other forces of nature and otherwise amaze. Friedensreich Hundertwasser, Antonio Gaudi, Antoine Predock, Frank Gehry and Frank Lloyd Wright are the architect/artists represented on my personal bookshelves. (Aside: I once had an opportunity to interview Gehry, when Tiffany & Co. unveiled its collaboration with him to design a collection of jewelry, and I was more nervous than when I’ve interviewed Hollywood celebrities.)

But back to books. I looked through the ones I inherited when I moved into my new office at San Diego Home/Garden Lifestyles. I’d already used a couple of the gardening books as references while editing articles. Now I took the time to look specifically for books on architects. I pulled out one titled New Architecture: An International Atlas (Harry N. Abrams Inc., 2007). Originally published in Spanish in 2005, the book by Francisco Asensio focuses on architecture “created during the last fifteen years.”

Yes, Gehry is included — for the Guggenheim Museum in Bilbao (I personally slightly favor his wild Hotel Marqués de Riscal) — and Predock gets the nod for his Mesa Public Library (but, gosh, have you seen his gates and tables?). Hundertwasser (his Forest Spiral in Germany is pictured above), Gaudi and Wright couldn’t qualify for the book, of course, because of their deaths predating the 15-year span of New Architecture.

These days, it seems, almost any project in Dubai pushes the boundaries. Unfortunately, many of the proposed designs seem to have met delays. One can only imagine the engineering and funding hurdles they have to cross.

Speaking of crossing, there sure are a lot of bridges featured in New Architecture. Maybe it’s because architects really get to experiment with physics they can’t have a foundation like they can build on land. Or maybe it’s because bridges get noticed because they’re not surrounded by other buildings. Anyway, the book primarily showcases commercial projects. The handful of houses included don’t strike me as particularly intriguing, especially when I think of what I’ve already seen around me in San Diego and after Senior Editor Phyllis Van Doren loaned me her book on the innovative designs of local architect Wallace Cunningham.

I’m on the lookout now for a Hundertwasseresque (i.e., organic and wavy) house in the area. If anybody out there knows of one, send me an email: janice@sdhg.net.