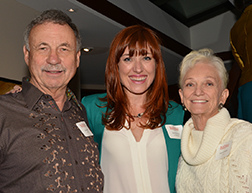 Bastiaan Booma hates it when people ask him what is his favorite building. “My favorite building is a building designed by a local architect and that the client is happy,” the new executive director and CEO of the San Diego chapter The American Institute of Architects said during his visit to our offices yesterday.

Later that day, I ran across an example of what Booma would put in that category. OK, maybe I didn’t “run across it;” after all, it was one of the Homes of the Year featured in our January issue, and this was a preview party. The point is that I didn’t know that’s what I was heading to while driving up the twisty, narrow, hilly labyrinth of streets in Del Mar (goodness, but the greater San Diego area does have a lot of twisty, narrow, hilly roadways — a relatively foreign concept to someone who’s been living in the desert for more than 20 years).

Anyway, thanks to GPS, I arrived in good form at the party (which hosted close to a hundred guests; shown above are homeowners John and Gunvor Rehfeld with architect Jennifer Bolyn). What impressed me (besides the view) was how the homeowners, architect and general contractor (as well as other contractors) spoke about the way everyone collaborated harmoniously from beginning to end. In fact, the same architectural/contractor team is working together on a house being built next door.

I found the same cohesive situation earlier at a home in La Jolla when I went to interview the architect, interior designer and homeowners for a feature that will run in our March issue. To a person, they enthused about the underpinning of unity throughout the planning and building process. The interior designer, Robert Wright, said, “We should have videotaped the whole thing.” Perhaps they should have — and then sent it to Congress as a lesson in how to work together.

But let’s not stray too far into politics. This is about the encouraging parts of how people in their businesses and in their personal lives (and in combinations thereof) can accomplish great things.

In both of the above examples of houses built from the ground up to meet the homeowners’ desires, I heard the word “trust” as it related to the clients trusting the experts they had hired. Trust, of course, can be mislaid (for example, you probably wouldn’t want to put too much trust in a stranger in a dark alleyway wearing a trench coat), but I know when people trust me that I work all the harder to prove to them that they have been wise to do so.

As new residents (the new AIA San Diego CEO relocated from Chicago), Booma and I share an enthusiasm for how we’ll fit into the local world of architecture and design. So far, my experiences have all been positive.

I take that back. There was one snag. While putting together a floor lamp I’d purchased for my new apartment, I discovered one of its shelves had three screw holes when it should have had four. My apologies to those in the checkout line with their Christmas gift purchases when I insisted on unboxing the replacement lamp before I left the store. Fortunately, this one was OK.

I just love a happy ending, don’t you?

P.S. Subsequent to writing the above, I experienced the corkscrew, claustrophobic, and tightly packed Symphony Tower parking garage. In comparison, the residential streetscapes are a piece-o-cake.

The above photograph was taken by Martin Mann at the preview party.