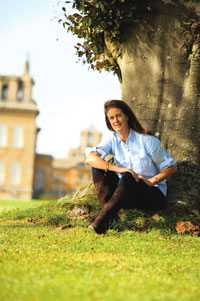 THE ROYAL OAK FOUNDATION in New York is a group of Americans who work in alliance with the National Trust of England and Wales to preserve great houses and gardens.

An active member of the ROF is La Jolla interior designer Kathleen Buoymaster. This month she brings author and designer Lady Henrietta Spencer-Churchill (pictured) into our midst at her La Jolla design firm, to speak on Celebrating Great Rooms: 300 Years of Changing Interiors, 3 p.m., October 24, $35. There will be tea afterwards and a signing of the new book, The Life of the House: How Rooms Evolve by Henrietta Spencer-Churchill, Rizzoli New York, 2012. This is a grand op-portunity and an education in the history of design. For start-ers, Lady Henrietta is the eldest daughter of the 11th Duke of Marlborough, whose family home is Blenheim Palace.

JACQUELINE LAVENU WILL BE SIGNING the just released retrospective catalog of her 40-year career in painting at her Little Italy studio and gallery, 5-7 p.m., October 3.

Hurry to see the California Fibers show featuring new work by its members before it closes October 7 at the Visions Art Museum at Liberty Station, NTC, in Point Loma.

Then, October 11, Senior Community Centers unveils the important photographic series of seniors by Philipp Scholz Rittermann called Notes to our Sons and Daughters. A reception is at the Port Pavilion on Broadway Pier at 6 p.m.

October is also officially National Arts and Humanities month. Our Commission for Arts and Culture and the San Diego Museum Council team up for the month-long Fall for the Arts 2012.

FURNITURE NEWS: Memphis is alive and well. About 100 furniture designs that came out of Milan in 1981 and after are being produced again and available online. Remember First chair, of the big blue polka dot, by Michele De Lucchi? It can be yours for about $1,200.

Architect Steve Lombardi also has resurfaced with his “storefront for design” studio and office on Bacon Street in Ocean Beach where now and then you can find exhibits of his new lighting designs and new furniture designs by friends.

Oak Leaves and Acorns, a contempo-rary marquetry cabinet, won First place and Excellence in Design awards for Craig Thibodeau at last summer’s Design in Wood at the Del Mar Fair.

DESIGNER ANJUM RAZVI is respon-sible for the interiors at the renovated Lafayette Hotel &Swim Club in North Park. Bells andWhistles worked on the restaurant. This place has a history back to the 1940s when it was the Imig Manor and frequented by Hollywood stars.

Philippe Beltran’s design fantasies are in play again as he imagines 100 Wines Hillcrest as a 1920s apothecary-cum-bar as if it was tucked away in a historic European alley, rustic and repurposed with old wine barrel chandeliers.

For more design ideas, join our eClub.
Sign up at www.sandiegohomegarden.com