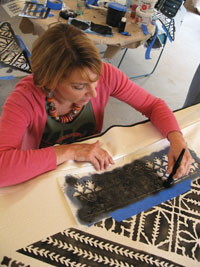 THE BOUTIQUE HOTEL IN MOROCCO, the best exotic Peacock Pavilions, to paraphrase a recent hit movie title, was already on my radar when I discovered the just-out Artisan Books title, Marrakesh by Design. How to decorate, live in and source Moroccan design for your home is written and photographed by Maryam Montague, owner of Peacock Pavilions.

What I didn’t know was that local painter/stencil artist Melanie Royals (pictured), (Royal Design Studio) has been taking trips to Peacock Pavilions since it was under construction and had a hands-on involvement with the decorating of many of the rooms, floors and tents, now fully illustrated in the book.

Montague recently came to San Diego to give workshops at Royal Design Studio and talk about her book. More building is in process at Peacock Pavilions, another tent, another pavilion, perhaps a hammam, so Royals will be painting away in Marrakesh again next spring. Textiles that are available in today’s marketplace are in tune with what you need if you’re trying to create the look at home.

THE EXTRAORDINARY BEQUEST to the San DiegoMuseum of Art of German Expressionistpaintings from the Vance E. Kondon and Elisabeth Giesberger estate just went on view at the museum, up until November 11. They are joined by more than 30 other paintings owned by SDMA from this early 20th-century movement.

ON A NEIGHBORHOOD SCALE, we viewed more than 30 paintings by Sharon Marie Cutri, a new body of work employing hot colors and touches of gold, loose brush strokes and some collage. This is a distinct diversion from the plein-air paintings she was known for in the past that were evocative of her Mission Cliff garden villa. Cutri’s work is on view until September 1 at House of Imago, Normal Heights.

A NEW PROGRAM at Hotel Solamar features an emerging local artist’s work, a few months at a time, and even offers hotel guests classes by the artist during their stay. Tina Christensen’s work is the first installation, remaining until at least the end of October.

IN THE “IT’S ABOUT TIME” department, the good news is that Peter Rosen is making a documentary on architecture and design master, Eero Saarinen, called An Architect’s Memoir. The bad news: There is a slight wait. It won’t be shown on PBS until 2014. In the meantime, you can revisit Saarinen by Googling images of the St. Louis Gateway Arch and the Washington Dulles International Airport among others.

I SUPPOSE THIS BIG BIT OF NEWS also could be classified under IAT. Architect Jonathan Segal, FAIA, recently won the national Project of the Year award from Residential Architecture magazine for his mixed-use project in Middletown called The Charmer, described as a modern interpretation of California 1920s courtyard design.

PARTY CONVERSATIONS were heavy into design recently at a VI Star bash: long-time design friend Ken Higgins of Afton Grove, revealed that instead of designing furniture and accessories, he’s still painting and is being represented by Susan Street Fine Art, Solana Beach.

FINALLY, is VI Star in for a name change already? A seventh design store has moved into the collaborative space in Little Italy, namely Neil Alan Designs. (This is a second location for the studio. The original Neil Alan Designs still can be found on Sixth Avenue.)