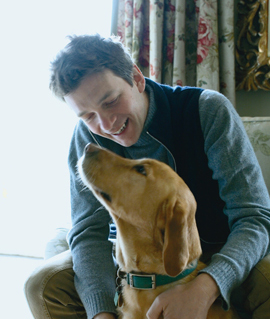 WE SWEPT INTO THE SIP WINE BAR in Del Mar Plaza one warm evening for a private showing of the latest Jim Thompson (Thailand-based textiles) collection and to chat up managing director Chad Holman, Richard Smith (pictured), the company’s talented fabric designer from the U.K., and director of sales Tim Johnson.They all were fresh off the plane from Paris’ Maison & Objet show, with their first promotional stop San Diego (our beach climate?) and a stunning show-and-tell of their high-end fabrics (see page 22). Sandy Gordon, Marsha Sewell, Dorothy Willetts, Marc Tarasuck and Ken Ronchetti were just a few of the familiar faces in the crowd.

Willetts, a Palm Springs designer, had joined the Jim Thompson group in Paris and snapped pictures of their display (below). The Jim Thompson fabric animals partied so hard the stuffing came out of the pillows. Lots of party animals of the zoological kind were in high evidence at the show — giant snails leaving a trail of fabric, a glittering crocodile snapping at a chandelier, papier-mâché heads and horns etc. Still, top-decorating chic.

MY VIRTUAL TOUR OF THE PARIS SHOW re-minds me how I love creative merchandise display and how it has all but vanished from San Diego stores. Where are all the talented window dressers, the magic voyage of the vitrine that could send us on a fantasy of discovery? Somebody please bring back the wild and surreal, the truly imaginative and off-the-wall to our show-room displays and street-facing windows.

FASHION ICON ZANDRA RHODES, who has a studio in Del Mar, recently was lured to Paris Fashion Week for a retrospective of her designs on the runway. Currently she’s finishing up her project for the summer London Olympics that includes undergarments for a giant 30-foot-tall Lady Godiva marionette that will be transported to London from Coventry by 50 cyclists. Talk about fantasy, there’s that Zandra.

THIS IS THE MONTH THAT SCOUT@QUARTERS D is scheduled for a grand opening. Owner Paul Scott Silvera is another local that shops Paris for our San Diego homes. He recently imported a pair of club chairs from a men’s social club that he found at Marche Paul Bert (see Hot Finds, page 29).

C’EST LA VIE SHOP OWNER SARA WARDRIP also shops for antiques in France, having recently returned from all the fairs in the south. She’s also selling on 1st Dibs now.

CONSIDERING HIS MARKETING TALENT, it may be old news that art gallery owner Alexander Salazar has a franchise for mini-galleries in all the Kimpton Group hotels, that debuted recently with Hotel Palomar in San Diego.

IF WALLPAPER IS THE NEW CUPCAKE, paint seems to be the new designer handbag of home fashion. All Ace Hardware stores have just launched their new premium line, Clark+Kensington, with 120 colors for their single-product paint, including primer, available in six sheens.

BRIEFLY, GRAHAM DOWNES ARCHITECTURE is just finishing up the Hard Rock Hotel in Nuevo Vallarta, Mexico; Knoll, the prestigious furniture company has purchased Richard Schultz Design and its timeless mid-century outdoor furnishings products; last, but still nooz, you can get a Sir Elton John candle over at Cathedral in Hillcrest. Scents are his favorite florals from his garden in Old Windsor, England.